For more than two decades, Rabbi Ruvi New dreamed of a musical odyssey with a greater meaning, one that would perpetuate the words of the Lubavitcher Rebbe to listeners far and wide through song.

After the Rebbe’s passing in 1994, Rabbi New, currently the Chabad shaliach to East Boca Raton, began writing lyrics that carried the Rebbe’s message, with a goal of sharing those spiritually meaningful words with a global audience.

“It was partially a cathartic process when I started but I was also thinking that this could be a way to share the Rebbe’s life with the world,” explained Rabbi New. “There is a vast amount of the Rebbe’s teachings and Torah in printed materials and video, but using music as a teaching tool is something different and unique.”

Working with multiple composers, Rabbi New eventually found himself with more than 20 original songs, most of which mixed English lyrics with Chabad themes. He began performing a self titled Musical Tribute to the Rebbe at Chabad houses throughout North America and Australia and soon found himself inundated with requests for recordings of his songs.

And with that, Storm the World , an all new album featuring 12 original compositions, was born. Teaming up with Bentzi Marcus of 8th Day as producer of the album, the two created a project that will touch the hearts of Jewish music lovers of all stripes. With an impressive selection of musical styles ranging from heartfelt to contemporary, and timeless lyrics with universal appeal, Storm the World includes compositions by Marcus, Yossi Green, Larry Gates, Chanale Fellig-Harrel and Asher Essebag. Also joining Rabbi New on his musical journey are vocalists Yossi Green, Bentzi Marcus, Eli Marcus and several exciting surprise guests.

Marcus said that he is confident that Storm the World will inspire and uplift listeners’ minds and souls, and that he was grateful for the opportunity to work with Rabbi New.

“Growing up in a Chabad home and having had the chance to meet the Rebbe and experience the Rebbe’s farbrengens in 770, the songs’ messages immediately resonated with me and the chance to help spread these beautiful inspirations with a musical production was something I couldn’t pass up,” said Marcus.

Stay tuned for a first taste of Storm the World with the release of two songs, the irrepressibly upbeat title track, “Storm The World” and the heartwarming ballad “The Match”. The full album will be available later this Summer. 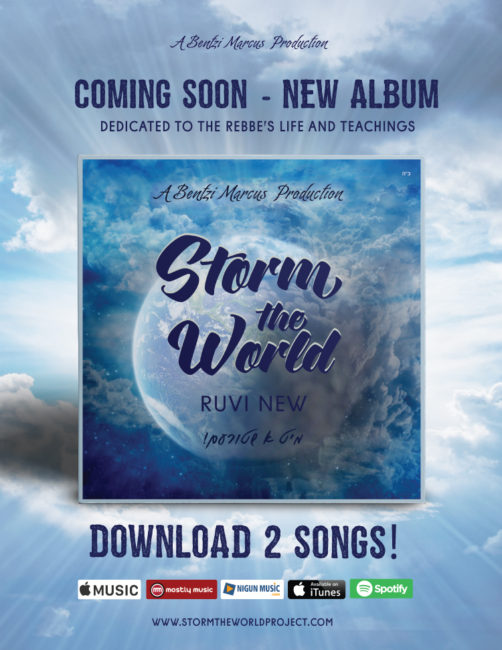 this guy is great hes a mix of don williams , willie nelson , and steve goodman ….very fresh and hearty…wow

why does it take so many years for such real talent to break out …..maybe we should have a second look at how we nurture the creative among us !!!!

What took so long to step up to the mic??? So refreshing and contemporary. Storm the World Ruvi – the world is ready!!!!

Is this a new shlichus ?