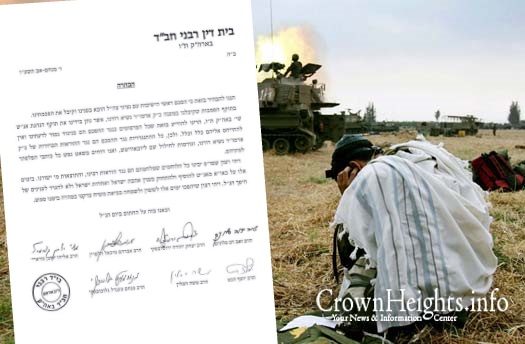 The Bais Din Rabbonei Chabad of Eretz Yisroel today released a letter backing the agreement reached between Chabad Askanim and the Israeli government regarding the draft of Lubavitcher young men to the IDF.

According to the deal that was hammered out, 15% of Chabad students will be exempt from army service, and the other 85% will be drafted at the age of 26, presumably after there are married. The agreement allows the students to leave the country for a year of ‘Kvutzeh’ in 770 prior to their service.

To counter these rumors, the Bais Din Rabbonei Chabad of Eretz Yisroel issued a letter today, Thursday, 7 Av, clarifying that they fully back the deal with the IDF, and that those who say the Rebbe was opposed to any such deal are erring.