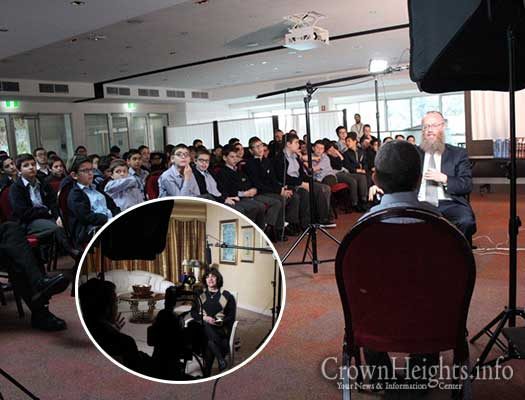 An interview series giving a glimpse into the personal connections between the Rebbe and Chassidim was recently brought into schools to give students the opportunity to hear them first hand has been recently expanded to Australia.

Immediately upon arrival, the team, led by Rabbis Yechiel Kagan and Zalman Groner, began meeting with people for interviews. It’s been non-stop since. They’ve been conducting four to five interviews every day, each lasting a number of hours. The Rebbe had a special interest in Australian Jewish life, and the stories being related are most unique and inspiring.

A few years ago, JEM began to conduct select interviews in schools. They expanded this project in Australia, and now, the school children, who’ve never met or seen the Rebbe, have a chance to hear personal stories of encounters between the Rebbe and the interviewees. The children were given the opportunity to ask some questions of their own, and get a feel for the precious relationship between Rebbe and Chossid.

JEM also arranged to hold a few interviews in Chabad centers around the country. With hundreds of people in attendance, people have shared some of the most unique stories to date at these recordings.

As they’ve toured the country conducting interviews, they’ve been greeted excitedly by fans of JEM, and JEM wishes to thank their friends and supporters who have welcomed them there so warmly.

Back in New York, The entire JEM team awaits their return, looking forward to immediately beginning work on producing the new material.

To donate to the My Encounter Project, please go to JEMedia.org/Donate